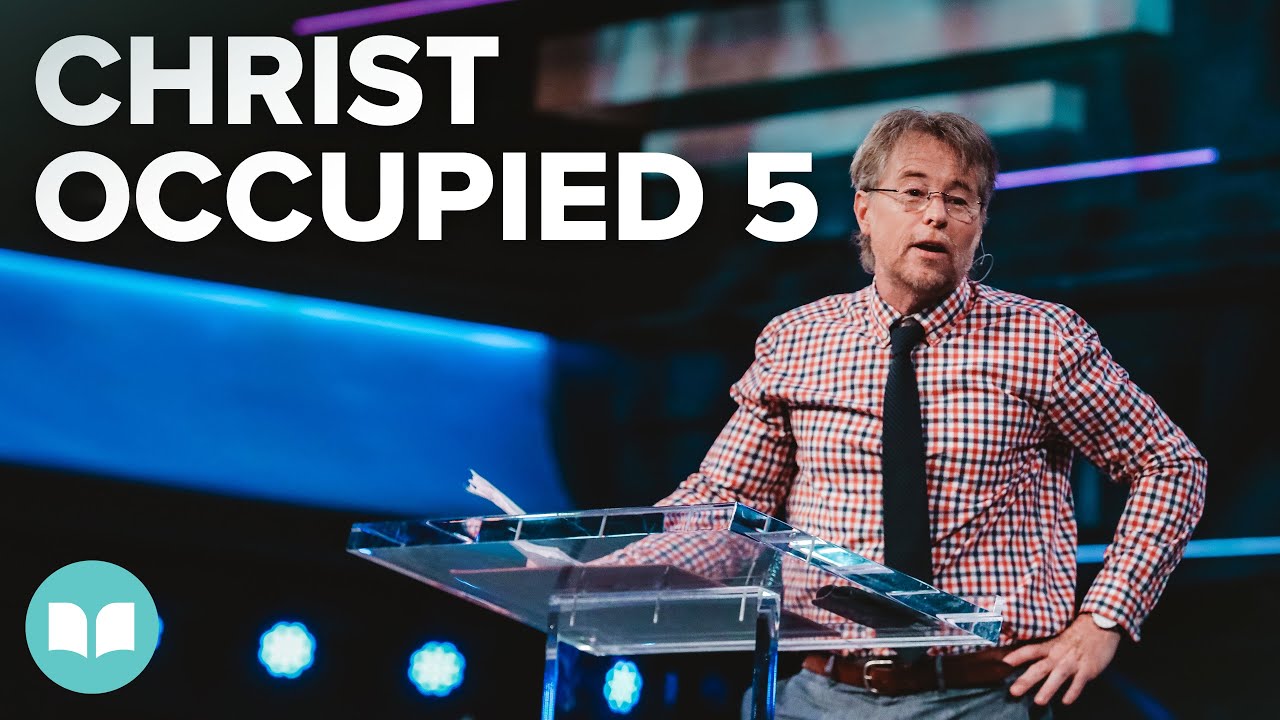 Recap:
God has forgiven you completely. Keep that truth central in your thinking. Too many times, people think that God will turn His back on them after they sin. They ignore the gift of God’s mercy and undeserved favor. God, however, wants each one of us to live with His free gift of righteousness central in our thinking. As we are quick to remember and receive God’s forgiveness of sins, we can also be quick to receive the healing and grace God has provided for other areas of our lives.

Dive Deeper:
This past weekend, Pastor Jim continued his series on the truth that being occupied with Christ is greater than being occupied with our selves. The more we realize how much Jesus did for us, the easier it will be to receive all God wants to give us.

Every time we sin, our righteousness is not snatched away. We can go back to God and receive His mercy for what we have done. Every time we doubt, we are not suddenly less righteous. We don’t lose an umbrella of protection over our lives. We are righteous because we’ve already been forgiven. God wants us to focus on that truth.

Read More:
Romans 8:32 Amp.
He who did not withhold or spare [even] His own Son but gave Him up for us all, will He not also with Him freely and graciously give us all [other] things?

Acts 14:8-12 KJV
And there sat a certain man at Lystra, impotent in his feet, being a cripple from his mother’s womb, who never had walked: the same heard Paul speak: who stedfastly beholding him, and perceiving that he had faith to be healed, said with a loud voice, Stand upright on thy feet. And he leaped and walked. And when the people saw what Paul had done, they lifted up their voices, saying in the speech of Lycaonia, The gods are come down to us in the likeness of men. And they called Barnabas, Jupiter; and Paul, Mercurius, because he was the chief speaker.

Luke 5:17-25 KJV
And it came to pass on a certain day, as he was teaching, that there were Pharisees and doctors of the law sitting by, which were come out of every town of Galilee, and Judaea, and Jerusalem: and the power of the Lord was present to heal them. And, behold, men brought in a bed a man which was taken with a palsy: and they sought means to bring him in, and to lay him before him. And when they could not find by what way they might bring him in because of the multitude, they went upon the housetop, and let him down through the tiling with his couch into the midst before Jesus. And when he saw their faith, he said unto him, Man, thy sins are forgiven thee. And the scribes and the Pharisees began to reason, saying, Who is this which speaketh blasphemies? Who can forgive sins, but God alone? But when Jesus perceived their thoughts, he answering said unto them, What reason ye in your hearts? Whether is easier, to say, Thy sins be forgiven thee; or to say, Rise up and walk? But that ye may know that the Son of man hath power upon earth to forgive sins, (he said unto the sick of the palsy,) I say unto thee, Arise, and take up thy couch, and go into thine house. And immediately he rose up before them, and took up that whereon he lay, and departed to his own house, glorifying God.

Romans 5:1-2 KJV
Therefore being justified by faith, we have peace with God through our Lord Jesus Christ: by whom also we have access by faith into this grace wherein we stand, and rejoice in hope of the glory of God.

Luke 5:23-24 KJV
Whether is easier, to say, Thy sins be forgiven thee; or to say, Rise up and walk? But that ye may know that the Son of man hath power upon earth to forgive sins, (he said unto the sick of the palsy,) I say unto thee, Arise, and take up thy couch, and go into thine house.

Colossians 1:12-14 Amp.
giving thanks to the Father, who has qualified us to share in the inheritance of the saints (God’s people) in the Light. For He has rescued us and has drawn us to Himself from the dominion of darkness, and has transferred us to the kingdom of His beloved Son, in whom we have redemption [because of His sacrifice, resulting in] the forgiveness of our sins [and the cancellation of sins’ penalty].

Colossians 2:13-15 KJV
And you, being dead in your sins and the uncircumcision of your flesh, hath he quickened together with him, having forgiven you all trespasses; blotting out the handwriting of ordinances that was against us, which was contrary to us, and took it out of the way, nailing it to his cross; and having spoiled principalities and powers, he made a shew of them openly, triumphing over them in it.

Colossians 2:13-15 Amp.
And you who were dead in trespasses and in the uncircumcision of your flesh (your sensuality, your sinful carnal nature), [God] brought to life together with [Christ], having [freely] forgiven us all our transgressions, having cancelled and blotted out and wiped away the handwriting of the note (bond) with its legal decrees and demands which was in force and stood against us (hostile to us). This [note with its regulations, decrees, and demands] He set aside and cleared completely out of our way by nailing it to [His] cross. [God] disarmed the principalities and powers that were ranged against us and made a bold display and public example of them, in triumphing over them in Him and in it [the cross].

Hebrews 8:12 Amp.
For I will be merciful and gracious toward their sins and I will remember their deeds of unrighteousness no more.

2 Peter 1:2 Amp.
May grace (God’s favor) and peace (which is perfect well-being, all necessary good, all spiritual prosperity, and freedom from fears and agitating passions and moral conflicts) be multiplied to you in [the full, personal, precise, and correct] knowledge of God and of Jesus our Lord.

2 Peter 1:5-9 KJV
And beside this, giving all diligence, add to your faith virtue; and to virtue knowledge; and to knowledge temperance; and to temperance patience; and to patience godliness; and to godliness brotherly kindness; and to brotherly kindness charity. For if these things be in you, and abound, they make you that ye shall neither be barren nor unfruitful in the knowledge of our Lord Jesus Christ. but he that lacketh these things is blind, and cannot see afar off, and hath forgotten that he was purged from his old sins.

2 Peter 1:12 KJV
Wherefore I will not be negligent to put you always in remembrance of these things, though ye know them, and be established in the present truth.

Hebrews 4:12 Amp.
For the Word that God speaks is alive and full of power [making it active, operative, energizing, and effective]; it is sharper than any two-edged sword, penetrating to the dividing line of the breath of life (soul) and [the immortal] spirit, and of joints and marrow [of the deepest parts of our nature], exposing and sifting and analyzing and judging the very thoughts and purposes of the heart.

Discussion Questions:
1. How does remembering Jesus’ sacrifice move us to a place of knowing that God has made us worthy to receive all He has given us?

2. When the enemy reminds us of how sinful we’ve been, what should we do?

3. How can we help other people know that they can receive God’s forgiveness of sins as well?

4. How does living in the peace and mercy of God impact our daily lives?